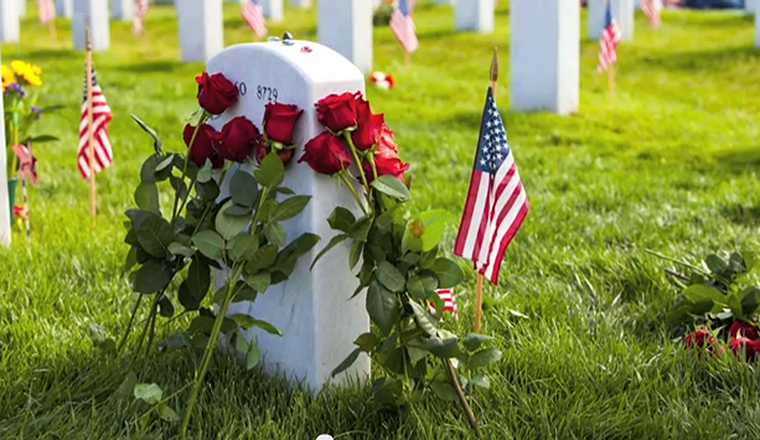 Why are soldiers’ graves decorated with flowers on Memorial Day?

Memorial Day in the United States has become the first weekend of summer. Pools open for the summer. Fireworks displays are shot off for the first time, and this is traditionally a very busy weekend for weddings.

Memorial Day the holiday however is a day that we as country pay respect to the men and women who gave the ultimate sacrifice for our freedom. They gave their lives. You will notice if you go to a cemetery or even pass one the graves are covered with flowers and flags more so than on any other day of the year.

Some believe that an annual cemetery decoration practice began before the American Civil War and thus may reflect the real origin of the “memorial day” idea. Annual Decoration Days for particular cemeteries are still held on a Sunday in late spring or early summer in some rural areas of the American South, notably in the mountain areas. In cases involving a family graveyard where remote ancestors as well as those who were deceased more recently are buried, this may take on the character of an extended family reunion to which some people travel hundreds of miles. People gather, put flowers on graves and renew contacts with relatives and others. There often is a religious service and a picnic-like “dinner on the grounds,” the traditional term for a potluck meal at a church.

On June 3, 1861, Warrenton, Virginia was the location of the first Civil War soldier’s grave ever to be decorated, according to a Richmond Times-Dispatch newspaper article in 1906. In 1862, women in Savannah, Georgia decorated Confederate soldiers’ graves according to the Savannah Republican. The 1863 cemetery dedication at Gettysburg, Pennsylvania, was a ceremony of commemoration at the graves of dead soldiers. On July 4, 1864, ladies decorated soldiers’ graves according to local historians in Boalsburg, Pennsylvania. Boalsburg promotes itself as the birthplace of Memorial Day.

In April 1865, following President Abraham Lincoln’s assassination, commemorations were ubiquitous. The more than 600,000 soldiers of both sides who died in the Civil War meant that burial and memorialization took on new cultural significance. Under the leadership of women during the war, an increasingly formal practice of decorating graves had taken shape. In 1865, the federal government began creating national military cemeteries for the Union war dead.

On May 1, 1865, in Charleston, South Carolina, recently freed African-Americans held a parade of 10,000 people to honor 257 dead Union Soldiers, whose remains they had reburied from a mass grave in a Confederate prison camp. Historian David W. Blight discovered contemporary news reports of this forgotten incident in the Charleston Daily Courier and the New-York Tribune. Blight claimed that “African Americans invented Memorial Day in Charleston, South Carolina”, In 2012, Blight stated that he “has no evidence” that the event in Charleston inspired the establishment of Memorial Day across the country. Snopes concludes that the Decoration Day observance did indeed take place but that it was not the origin of Memorial Day, labeling Blight’s claim a “mixture.”

In 1868, copying a southern annual observance, General John A. Logan of the Grand Army of the Republic, an organization of Union veterans founded in Decatur, Illinois, established Decoration Day as a time for the nation to decorate the graves of the Union war dead with flowers. By the 20th century, various Union and Confederate memorial traditions, celebrated on different days, merged, and Memorial Day eventually extended to honor all Americans who died while in the military service.

On May 26, 1966, President Lyndon B. Johnson designated an “official” birthplace of the holiday by signing the presidential proclamation naming Waterloo, New York, as the holder of the title. This action followed House Concurrent Resolution 587, in which the 89th Congress had officially recognized that the patriotic tradition of observing Memorial Day had begun one hundred years prior in Waterloo, New York. The village credits druggist Henry C. Welles and county clerk John B. Murray as the founders of the holiday. Scholars have determined that the Waterloo account is a myth. Snopes and Live Science also discredit the Waterloo account.

The preferred name for the holiday gradually changed from “Decoration Day” to “Memorial Day,” which was first used in 1882. Memorial Day did not become the more common name until after World War II, and was not declared the official name by Federal law until 1967. On June 28, 1968, Congress passed the Uniform Monday Holiday Act, which moved four holidays, including Memorial Day, from their traditional dates to a specified Monday in order to create a convenient three-day weekend. The change moved Memorial Day from its traditional May 30 date to the last Monday in May. The law took effect at the federal level in 1971. After some initial confusion and unwillingness to comply, all 50 states adopted Congress’ change of date within a few years.